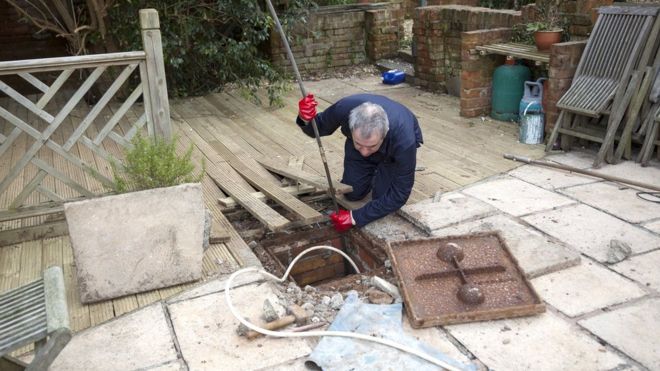 Householders with blocked drains are being warned to think twice before employing claims management companies (CMCs) to process a claim.

The insurance company Direct Line says that more than half the claims being made by such firms are “invalid, inflated or fraudulent”.

Many people have cover for blocked drains as part of their home insurance.

However, sometimes a CMC will offer to handle the claim for them, charging a significant sum.

Direct Line says some people end up paying thousands of pounds to such companies when they could contact their insurance company for free.

The firm says there has been a sharp rise in the number of claims being made for blocked drains.

In the first quarter of 2017, it estimates the number increased by 22% compared to 2016, with no apparent or logical explanation.

It’s thought that in some cases, unscrupulous drainage firms are selling details of their clients to CMCs.

Those CMCs then approach the householder and ask them to sign a bit of paper, typically promising to give the management company 10% of the eventual insurance payout.

Direct Line says that in some cases, people can also be confused about whether they are dealing with a drain repair company or a CMC.

“It is important that vulnerable customers who have an issue with their property are not taken advantage of by companies that are looking to profit from their misfortune,” said Katie Lomas, director of Direct Line Home Insurance.

“Fraudulent and inflated claims drive up the cost of policies for all consumers. Anyone that thinks they may need to make a claim on their insurance policy should contact their provider directly.”

As part of its research, Direct Line examined more than 2,000 drainage claims made in the last year. It found that 54% of them had been inflated or were invalid, costing UK insurance companies £2m.

New General Data Protection Regulations – How Does It Affect You?

Changes to the Personal Accident Discount Rate – The Ogden Rate

Choice Insurance Agency Ltd is authorised and regulated by the Financial Conduct Authority and is entered on the Financial Services Register (http://www.fca.org.uk/register) under reference 300183. We are an Underwriting Agency working in partnership with key brokers around the UK to place quality business with our panel of leading insurers. Registered in England number 4420555. Registered office: Suite 3, 4a Southchurch Road, Southend-on-Sea, Essex, SS1 2NE.

Decide which cookies you want to allow. You can change these settings at any time. However, this can result in some functions no longer being available. For information on deleting the cookies, please consult your browser’s help function. Learn more about the cookies we use.

With the slider, you can enable or disable different types of cookies: